On Tuesday night, several young men lined up to wrestle Jennings County. Although their heights, weights, ages, and years of experienced differed, all were united under the common goal: to push themselves to be their best. The duel with Jennings County started off with the elementary kids wrestling and the high school match followed. 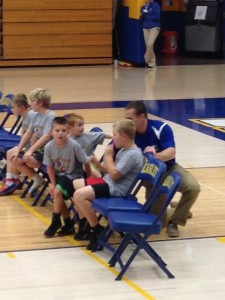 Following the elementary duel, the high school wrestlers defeated Jennings County 40-36. Freshmen David Tucker and Kenny Eason got the Eagles off to a great start by pinning their opponents. Also winning for the Eagles include senior Job Lawson, sophomore Bryce Denton, junior Ben Rygiel, senior Evan Bullock, junior Levi Mullins, and senior Baylee Mosier. However, the most exciting match of the night occurred at 145 pounds; junior Ben Rygiel narrowly defeated his opponent with a score of 9-8.

The Brown County Eagles will square off next against Indian Creek this upcoming Tuesday, December 6th and would love to see you in the stands.